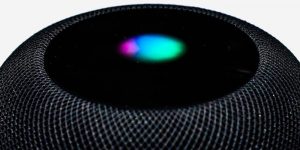 It’s been a long time coming, but Apple is about to enter the living room with the HomePod, which is to go on sale on the 9th of February. However, unlike what everyone expects, Apple is not looking at the smart home market.

The HomePod is a cylindrical speaker unit with Siri voice control, much like the Amazon Echo and the Google Home device. That is where the similarity ends. The HomePod design centers around audio quality and will appeal more to Hi-Fi audio fans than someone looking for a smart speaker in the kitchen. The HomePod only features support for Apple Music and does not support any other music streaming service natively. You can stream using your phone and AirPlay, but that process is cumbersome and introduces delays.

Until the device is widely available, there is no indication of how much information Siri will provide. Also, even if Siri does respond to queries like Alexa and Google Assistant, we don’t know what source Apple will use for that information. From a marketing and SEO perspective, we don’t know if Apple will use a third party data source and if anyone can influence that data.

We still don’t know enough about the device, how it works, and Apple’s long-term plans. The A-series CPU alone dwarfs what you would find inside an Echo. It certainly has the hardware to operate as a full-blown smart speaker and smart home hub.